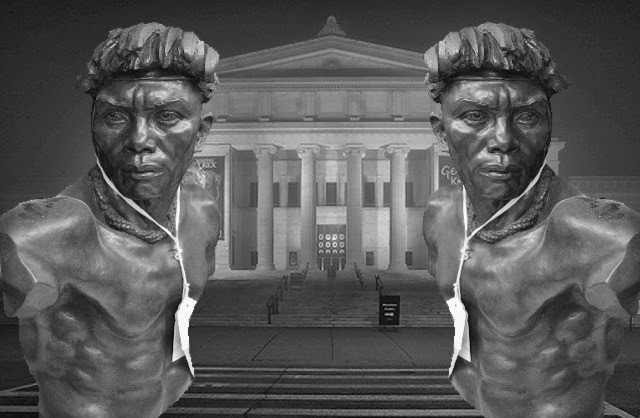 My debut novel, “Igorotdo: The Enlightened Warrior Within,” is based on the premise that one’s cultural heritage could be a catalyst for personal and spiritual development. It combines real historical events and fictional storytelling to inspire readers towards realizing this idea. Recently, these ideas of connecting cultural heritage to personal development found their way into the world of historical artifacts.

A few days before my book’s release in November, I learned about 10,000 Filipino artifacts inside the hidden vaults of the Chicago Field museum.  To my amazement, I discovered that roughly 4,000 of them are of Cordillera / Igorot origin. It happened during an event at the Chicago Field Museum called “Marae Encounter,” where the Chicago Filipino-American community met with the museum staff in the tradition of a Maori Marae encounter. During the event, I met Nepia Mahuika, an indigenous Maori from New Zealand. I never met a Maori, but what I knew of them earned my utmost respect. 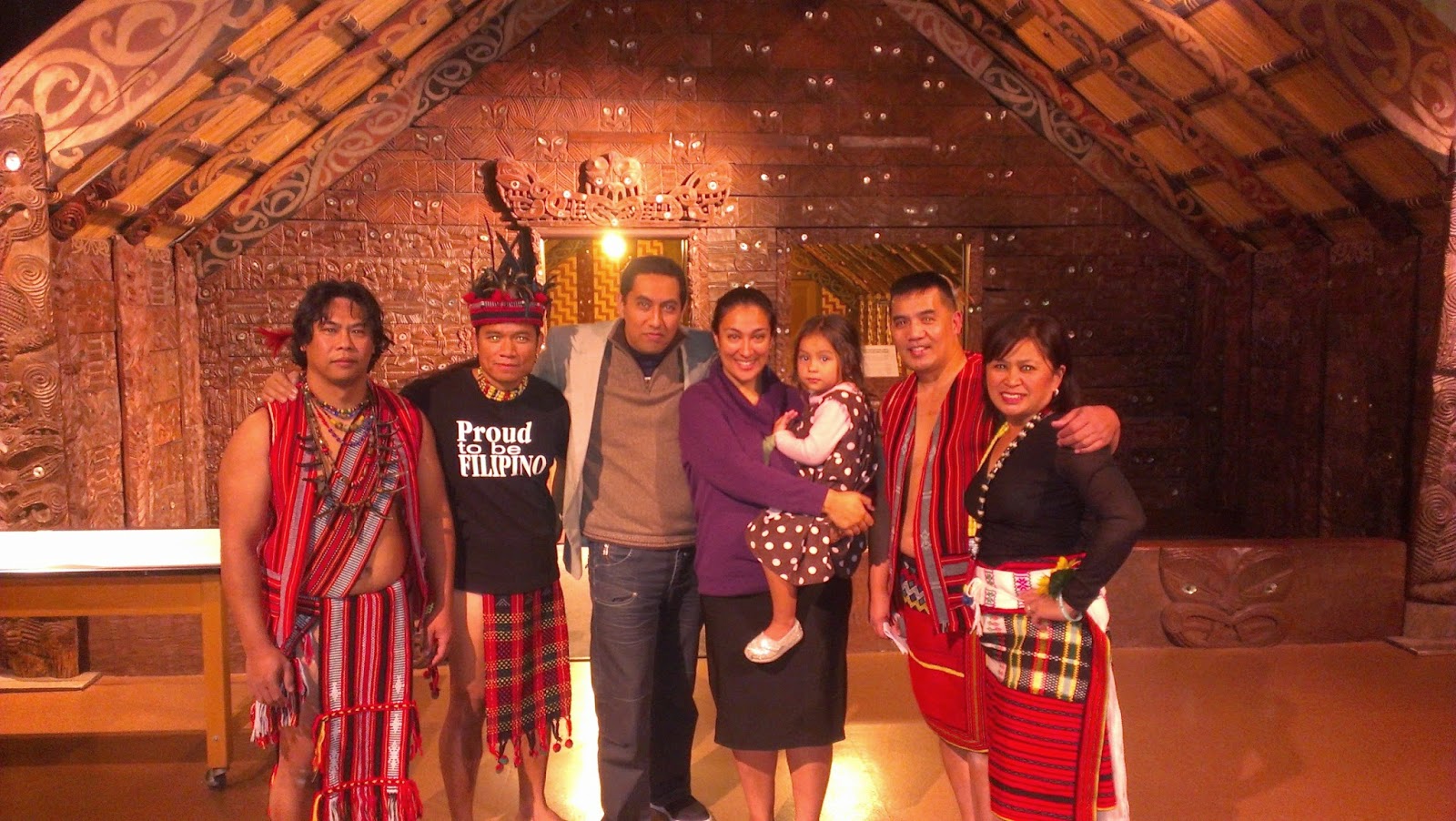 Last year I helped promote the fund-raising event to helpthe indigenous Ainu of Japan travel to New Zealand so they can learn from the Maori how to better revitalize and ensure the survival of their dying culture. The thought of one indigenous culture learning from another intrigued me so much that I began doing some research on the Maori. I quickly became impressed by the Maori and their successful efforts to preserve their culture.

After listening to Nepia Mahuika’s inspiring speech that night, I had a conversation with him that followed with a haka lesson. He complimented me on my efforts to promote my Igorot heritage. I was so moved that I gave him my very first signed copy of my book. Because of him I became inspired to take an active role in promoting the artifacts that came from the land of my ancestors. On my way home, I began mentally forming what is now the 4K Breaths of Heritage Crusade.

With the help of my cousin, Maria Luz Fang-asan, and friends from abroad; I steeped myself in researching the first few artifacts featured in our website’s first gallery. In the process, I was surprised to discover that many present-day Igorots either have little knowledge of old artifacts or lack the interest to learn about them. Though surprising, the first doesn’t bother me because I know ignorance is simple to solve through education. The latter, however, is quite disturbing simply because “interest” is the foundation of anything worthwhile.

I believe the greatest obstacle this project has in gaining the interest of many Igorots is the fact that they come from and represent our “old ways.” In general, society discourages traditional ways by labeling them “old fashion.” As a result, people easily to fall into the false notion that there’s no room in our modern society for the old ways. To combat this, I created Alex, my book’s main character.

Alex was anything but old fashioned. He was a contemporary and progressive man surrounded by material success. It took head-on collisions with events of old for him to realize how unsuccessful he truly was. By connecting with the historical past, he discovers the enlightened warrior within him and thus, becomes a better person.

Like the historical events in Alex’s journey, the 4,000 Cordillera / Igorot artifacts posses valuable things that can also help individuals connect with something within, thus helping them become a better person. It’s this “inward” connection that counts most. On the “outside” one can appear connected to their culture by their ability to speak, eat, and dress the part, but if they are disconnected from the core values and virtues of their heritage; they are essentially disconnected.  The artifacts can help us discover and connect with new meanings in our lives.

For example, some of my favorite artifacts are those that relate to the art of weaving native textiles. Things like the enabel (backstrap looms) and lilidsan (cotton gin), and pinakpagan (blanket) speak of a culture in where identity and meaning are woven into the mere fabrics of their souls. This is what sets them apart from today’s textile world. Personally, I draw particular inspiration from the symbols woven into the Bontoc fabrics. In fact, these symbols are the primary inspiration behind the magic blanket that takes Alex through his journey in my book. 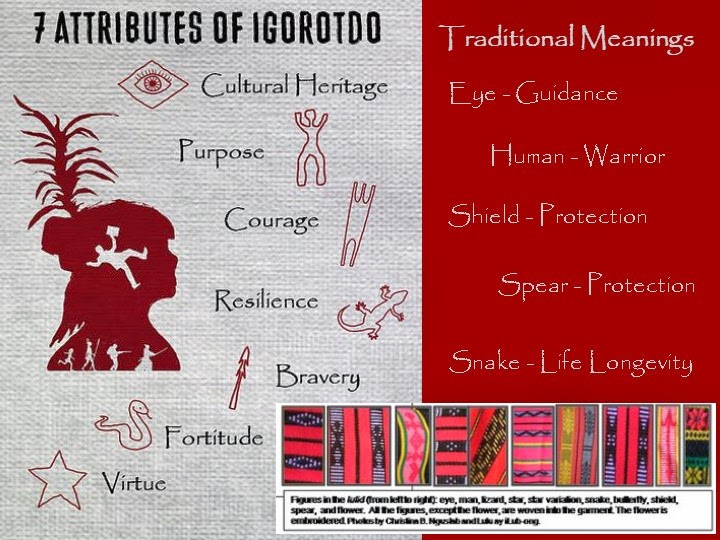 Historically, the eye, human figure, spear, lizard, snake, and star have their own traditional meanings, but I applied a fictional touch by having them represent certain characteristic traits of Igorots. The eye represents cultural heritage, the human figure – life purpose, shield – courage, lizard – resilience, spear – bravery, snake – fortitude, and star – virtue. All of these things are important in life, yet are all too often ignored or taken for granted.

Another artifact that inspires me is the simple farming tools such as the Tinguian planting stick. In my book, I describe a group of women turning soil and how they find joy in it. How many of us can truly say we enjoy our work? Statistics in America say that the majority of Americans hate their jobs. Forbes says that 70% of Americans hate their jobs. This shouldn’t be. We should all strive to work hard and enjoy doing what we do.

In addition, the simplicity of life that these planting tools imply is desperately needed in today’s society. How much material “stuff” do we really need? We keep collecting stuff upon stuff upon stuff. Parents work double jobs just to keep up with the payments of their stuff, while quality time for children and spouse are unnecessarily sacrificed. It’s sad to see how materialism often plays a major role in the number of broken families and marriages today.

Strangely, as a devout Catholic, I also find inspiration in the artifacts that relate to our pagan origins such as the carved anito, bulul spirits and deities.  Many Cordillerans have converted to Christianity since the turn of the twentieth century. My mother was one of them. In fact, she was the first Christian in her family. Her father, a pagan priest, was the second as he was converted by my mother just prior to his death.  She rejected the old pagan practices and wanted nothing to do with them.

For a long time, I too shared her feelings, but the more I learn about our pagan ways; the more I appreciate the old adage “something is better than nothing.”  When I consider the rampant spread of narcissism, selfishness, and rejection of a supreme being in our society; I find consolation that my ancestors recognized something other than themselves. In fact, their beliefs and spiritual nature helps me appreciate the old ways while strengthening my personal Catholic faith.

If people allow themselves to appreciate these artifacts, they can discover new meaning and inspiration that not only draws them closer to their cultural heritage, but can ultimately help them become a better person. These 4,000 hidden Cordilleran / Igorot artifacts need the support of the generations that followed so that our indigenous cultural heritage can thrive as that of the Maori.

Kindly, take this moment to view the 4k Breaths of Heritage Crusade website to see how you can support their efforts.

Posted by Rexcrisanto Delson at 9:07 PM