A Pause for Veterans 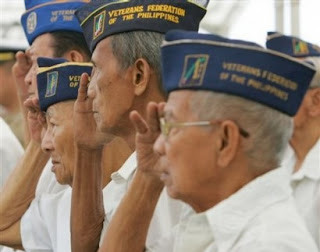 Today I was greeted by a fellow co-worker in a way that triggered my writing juices again.  In passing, he smiled and said, “Thank you for your service to our country.”  I was caught off guard and quickly realized today is Veterans Day.
My immediate thoughts were of the thousands of modern day Veterans still living today and how we as a country are so indebted to them for making it possible to live in this wonderful country I call home.  As the day unfolded, I started thinking of all the Filipinos who militarily served this country.  The idea of Filipino-American Veterans rang a bell of irony that continues to resonate on this important American holiday.
﻿
﻿ After the Philippines went to war against America at the turn of the century, who would have thought that the Filipinos would be fighting alongside their former enemy only thirty seven years after surrendering to them in 1902.  Certainly, Filipino historian E. San Juan Jr.,who alleged that the death of 1.4 million Filipinos during that war constituted an act of genocide on the part of the United States; wouldn’t have believed it himself.  Our alliance with America during World War II is proof that the hatred toward the Japanese at the time was undoubtedly greater than the hatred that Filipinos once had for Americans.
Image if a similar scenario happened here in America.  What if, in 1973, a foreign nation invaded America and killed 1.4 million Americans in a span of 3 years.  Would we be so willing to fight alongside them today if war broke out?  Better yet, imagine enlisting in that country’s military to fight the war.
Nevertheless, many Filipinos did just that, and today we still have many who are still living to tell their stories.  Out of all the living Filipino Veterans who fought as an American soldier in WWII, I wonder how many of them are Igorot.  If any of you reading this know of any, I would love to write them and express my appreciation.
In many cases, the involvement by small minorities during large scale war are often overlooked and/or forgotten.  This is not the case for my Igorot predecessors of WWII.  Even though they made up the smallest percentage Filipinos who served in the American military, their bravery and courage was so great that it caught the attention of American General MacArthur at the time.
An article in the Time Magazine edition of March 2, 1942 captured the General’s appreciation for Igorots when it wrote:


"This War Department communique last week, like so many of its predecessors, was 100% terse pessimism. Douglas Mac-Arthur and his battle-weary, outnumbered troops were still holding Bataan Peninsula and Manila Bay's five defensive forts. But their collapse under ever-increasing enemy weight and ferocity seemed imminent as never before. . . .  There were bright spots in the picture, however. In his weekend communique Douglas MacArthur included the dramatic story of non-Christian Igorot native tribesmen who, in an offensive over rough, matted terrain, mounted U.S. tanks like so many half-nude jockeys to direct American drivers inside. "When the attack was over," said the General, "the remnants of the tanks and of the Igorots were still there, but the 20th Japanese Infantry Regiment was completely annihilated. . . . When you tell that story, stand in tribute to those gallant Igorots."

While I wish to express my thanks and appreciation to ALL veterans today; I really want to give a “shout out” to my fellow Igorots who are American veterans and those who continue to serve this wonderful country.  By the way, I wonder how many Igorots were or are Marines.  I haven’t met any Igorot Marines to this day so if anyone knows one, please let me know.  Happy Veterans Day everyone!