Blame the Spaniards for the Discrimination

In the words of the great Filipino, Jose Rizal:


"He who does not know how to look back at where he came from will never get to his destination." 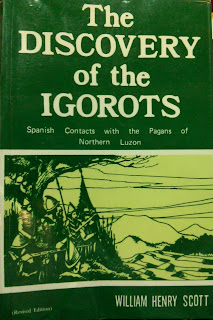 This saying will be the basis of this blog, which will attempt to clarify the origins of the discrimination existing within Filipinos for the purpose of dowsing the flames of ignorance about my people: the Igorots.  After posting my previous blog, "A True Proud Filipino," I came to an understanding and acceptance that discrimination and derogated outlooks toward Igorots still exist in today's multi-cultural-friendly world.  It is bad enough that discrimination exists between different ethnic races, but it is even worse to see it within the same people; in this case: Filipinos.
In following with Rizal's quote above, I chose to use a wonderful source to point out that the origins of today's discrimination are NOT from Filipinos, but from Spaniards.  This source is a book titled, "The Discovery of the Igorots," written by William Henry Scott.  Mr. Scott is not only a well known scholar of Igorot culture, but he also used very credible sources to write this book.  In the Introduction, Scott writes on page 7:
"The results of the Spanish occupation of the Cordillera were grim.  Where they established effective military control, it is true, they built horse trails and made it possible for Igorot travellers, lowland soldiers, and Spanish missionaries to move freely through former enemy territory; they introduced coffee, cacao, and citrus fruits which made Igorot dining less monotonous and added Vitamin-C to their diet but mainly profited lowland and Spanish settlers; they increased the power of a handful of Igorot leaders, taught a few hundred how to read and write, intentionally or unintentionally caused thousands to migrate to the lowlands, and left 8,000 baptized Christians when they departed.  But they also seized Igorot pigs, chickens, and rice or purchased them at unfair prices; they helped reduce the poor to debt peonage by demanding the same tribute from everybody while exempting the rich and powerful from forced labor; they punished one village by leading their enemies against them from another; and they burned houses, cut crops, pulled down walls - and introduced smallpox - in no less than 75 expeditions in the 19th century alone.  But the grimmest result of the discovery of the Igorots was subtler, more tragic and longer lasting - the creation of a distinction between lowland and highland Filipinos which contrasted submission, conversion, and civilization on the one hand with independence, paganism, and savagery on the other."
So there, now that we know the Spaniards created the discrimination; let's just say, "Blame it on the Spaniards," and move on as Filipinos.  For those who choose to disregard this and continue spreading ignorant comments of Igorots; to them I will speak at their level and refer to a wise person who once said:


"Silly rabbit, tricks are for kids." 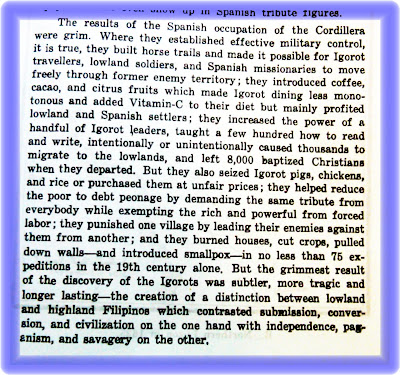