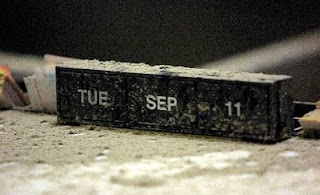 Today is the ninth anniversary of a very horrific moment in America.


Hard to believe it’s already been nine years since I was up on a Tababuya tree watching people frantically running inside the Morikami Museum in Delray Beach, Florida to watch something on the news.

Refusing to give into any such distractions, I continued working only to find my stomach turned upside down later that evening as I watched through watery eyes; the evil that made its way into thousands of souls around.

Three years later, I drove to Bridgehampton, New York to manage a new project for work.  When my work was finished, I hopped into my truck on September 11, 2003 and began driving back to my home in Florida.  When I drove through New York City, I was completely unaware that the people of that city dedicated a moment of silence at the exact time the Twin Towers perished. I turned on the radio in my truck and heard Howard Stern. “Why is Howard Stern on this channel?” I thought. Suddenly, I began hearing about reports of a possible plane crashing into the twin towers. I momentarily became alarmed, but quickly realized it was a re-broadcast of his show during that day of the attack.

Chills shot up through my spine as I listened intently. The feeling was very surreal, and I felt myself transporting back to that horrific day. All the cars stopped in their tracks, but I continued driving. “What the h@#%ll!” I said aloud. “Are you crazy? You can’t just stop in the middle of the highway!” I said to all the cars I swerved around and passed.

Angry eyes pierced through my windows as cars began honking at me. “Only a Floridian would be so stupid,” they must have thought. Then I realized what was happening. All the radio channels went dead and the faces of all the people around turned solemn. It was a moment of silence for the entire city. I immediately stopped, placed my truck into park and sat in silence.

“What am I suppose to do?” I thought. “Commemorate, pray, cry or shout?” The plethora of emotions was too much for me at the time, and so I did all the above.” It was at that moment that I realized who I was, and today I am reminded again.

I am neither Igorot nor American. I am not what I do for a living or for fun. I am not who I think I am most of the time. No, today I am just human.