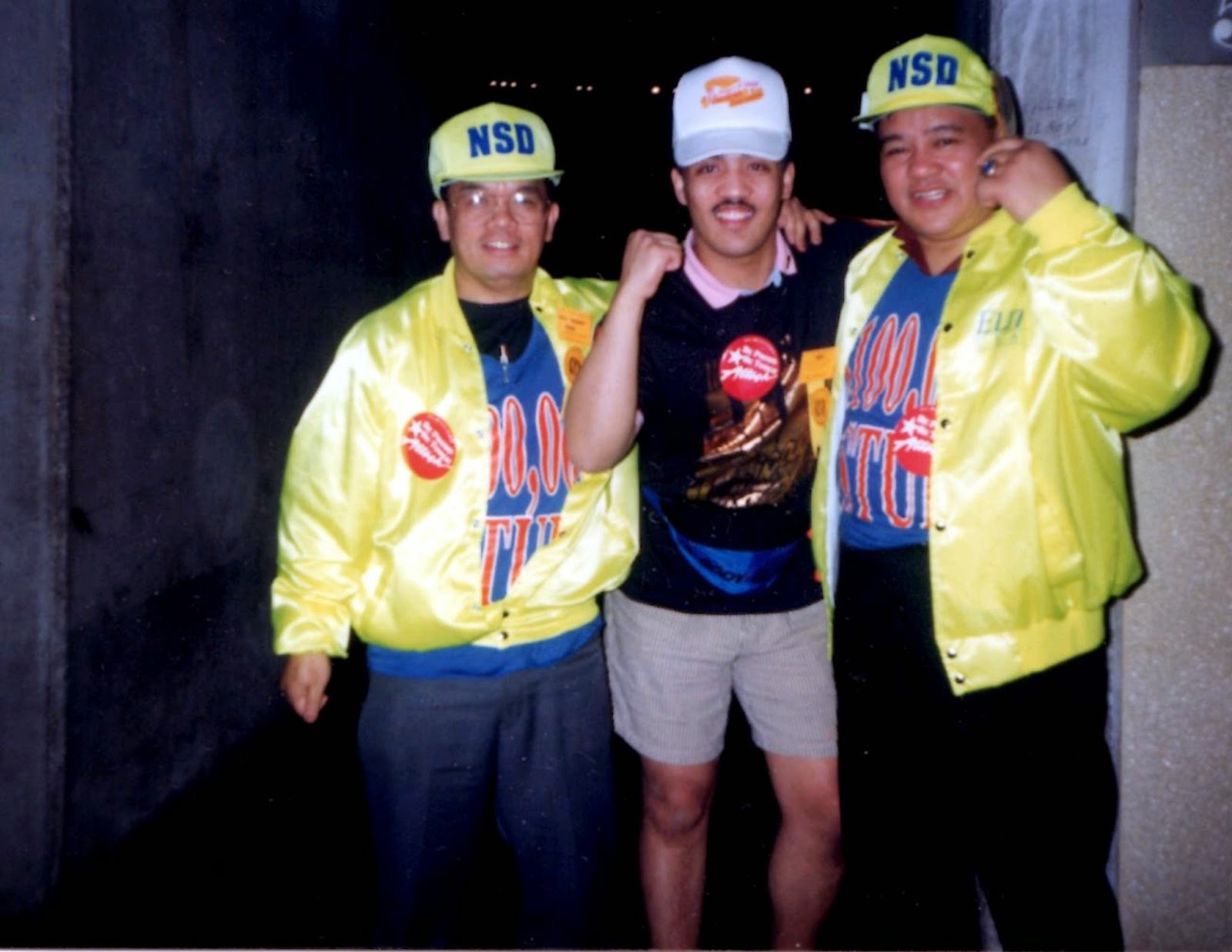 More than twenty years ago, I once stood in the midst of greatness; in between two men who made the decision to do great things with their lives. That day, they wore fluorescent green jackets with matching “snapback” hats, way before snapbacks were conceived. It was a time when their past business and personal achievements culminated into a moment of celebration for what they had accomplished. Both celebrated by raising their fists, which bore huge-gaudy gold rings the size of NFL Superbowl Championship rings. As their rings broke the atmosphere of complacency and laziness, the inscribed names of Delson and Longid glistened.

Ninteen years ago, I was deeply touched by the number of positive comments, testimonies, and stories about the first man shortly after his passing. They all seemed to repeat in one way or another, how he made a positive impact on their lives and those of so many. Recently, on August 25, 2014, the latter passed away.  Immediately after his death, stories about him began surfacing within the social media world. The first man was my father, Crisanto Delson, who died along with my mother and sister in a car accident in 1995. The second was Norman Longid, whom I always referred to as “Uncle Norm.”

It’s hard to talk about one without talking about the other. Anyone who knew them could tell you how they lived strong faith-based lies, valued their marriages and family, had positive attitudes, had a great sense of purpose in life, possessed excellent work ethics, inspired others to become better people, and loved their neighbors to the best of their abilities. There is, however, something very special about them that many people are not aware of; qualities and attributes that made up the backbone of their very identity.

Within the marrow of this backbone existed their true sense of identity. More than just ethnicity or culture, their identity was rooted in the DNA of being indigenous Igorots. For untold generations, Igorots have passed down certain attributes that are innate to their identity, more so than outside features. The following seven particular attributes always come to mind when I reflect on my ancestors.

Unlike countless of people today, whose lives lack purpose; the daily lives of our ancestors were driven with purpose. Their sense of purpose was a selfless kind that focused on serving others in their family and community. Uncle Norm and dad managed to hold on to this dear attribute as they strove to help others through their spiritual, business, and everyday life. It was clear to them that they were put on this earth with certain gifts and talents, and that these things were meant to help others. For them, it was expected of them to contribute to the greater good of this world, to live with purpose, and to do something special with their lives in the eyes of God.

From the stories I’ve heard about their childhood and adolescent years, it is clear that they strove to live lives of high moral standards. For example, both realized the dangers of falling into the corruption and immorality that surrounded them during the Marcos dictatorship. They were disillusioned with the government and knew that by staying in the Philippines, they too could succumb to things that would compromise their moral fiber. Yes, their upbringing in the Christian faith (Episcopalian for Norm and Catholicism for dad) had plenty to do with this, but what many don’t realize; their indigenous ancestry played the most important part.

It is the soil that nurtured their seeds of Christianty. Long before Christianity, a moral code or way for Igorots known as “inayan” existed (and still does). Doing things that are right, valuing marriage and family, selflessness, and treating others the way one wants to be treated all combine to make for fertile soil to cultivate higher spiritualities. Unfortunately, the portrayal of Igorots as savages by Filipino lowlanders and western cultures have overshadowed the true goodness and virtues of our people. Fortunately, there are those like Uncle Norm and dad who still exemplified our inayan.

The ability to enter a known or unknown situation, despite whatever dangers may exist, is also innate to Igorots. This has well been documented by westerners during World War II, especially by General Douglas MacArthur when he was quoted as saying:

“Many desperate acts of courage and heroism have fallen under my observation on many fields of battle in many parts of the world. I have seen forlorn hopes become realities. I have seen last-ditch stands and innumerable acts of personal heroism that defy description. but for sheer breathtaking and heart stopping desperation, I have never known the equal of those Igorots riding the tanks. Gentlemen, when you tell the story stand in tribute to those gallant Igorots.”


Although Uncle Norm and dad did not fight on the battlefields of war, they fought on many other battlefields. One battlefield that comes to mind is their decision to enter the unknown world of entrepreneurialism. The decision to leave the “security” blanket of a steady job is one that many lack the courage and bravery to do.

For more than 300 years, Spain colonized the archipelago and branded it with the name Philippines, which was named after King “Phillip.” Igorots, on the other hand were never colonized. They successfully fought off Spain’s attempts to conquer them, and as a result, their culture still remains intact.

The fortitude and resilience that protected their culture for centuries also helped both men in their everyday challenges and struggles. When they decided to pass on social events because of the more important priorities of God, family, and business; it took both attributes to ignore criticisms and rumors. When my father was told he could not succeed in business because of his strong accent, these attributes kicked in. When Uncle Norm was diagnosed with cancer, it took the same to get as far as he did. When they decided to give up alcohol for the sake of their health and their families, the fortitude and resilience within enabled them to stay the course despite what others thought or said. For both, it’s impossible to hear stories about them without hearing about  their toughness, backbone, strong-mindedness, steadfastness, mettle, and endurance against adversity.

The last time I spent with both men alone was at a restaurant twenty one years ago. It was over a casual lunch near the office. Naturally, I thought they would talk about their Primerica businesses because it was always the topic of the day. Surprisingly, as Uncle Norm cut into his liver and grilled onions plate, he started talking about an experience in his Igorot hometown of Sagada that somehow related to the food. This led to an exchange of more experiences from both about their hometowns, which turned into an imparting of their “Igorotness” to me. I recall my dad saying something about Filipino time versus Igorot time, in that if Igorots lived their lives always being late for things (which Filipinos are known to have adopted from Spain – the “manana” habit); the rice terraces wouldn’t be an eighth wonder of the world. They clearly wanted me to know how their Igorotness played a part in their daily lives.

Here in America, people rarely pay attention to their cultural heritage. It is often lost in the strong currents of assimilation. This was not the case for these men. Although it wasn’t always apparent on the outside, both men truly treasured their indigenous ancestry and would attribute who they were to where they came from.

In a book review of the novel, Igorotdo: The Enlightened Warrior Within, an American anthropologist captured my attention with these words:

“Alex's [main character] voyage of self discovery appeals to the Igorot in all of us, in that it appeals to the American search for our heritage. We're a young melting pot country, not yet old enough to have completely established our own cultural identity; and yet many of us derive from people of so many heritages that we're not sure what to call ourselves except "American." Add to that the fact that so many of our ancestors deliberately suppressed their origins in the effort to assimilate, and many of us feel lost at a deep level.”


Unlike many other cultures, Igorots have relied on passing down their culture by word of mouth. As more and more of the elders who possess such treasures die, countless amounts of indigenous knowledge also go with them. These days, Igorots are increasingly adopting the ways of lowlanders, westerners, and other cultures. As a result, the measure of an Igorot is often skewed. The measure of a great Igorot should not only be measured by their language, what they wear, how well they play gangsa instruments, the music they listen to, and any other outward features and characteristics. Rather, it needs to be measured by how they lived their lives. Next time you meet an Igorot, look at their relationship with God above all, then look at their marriages, families, and all the selfless good they have done. If you smile as a result, then you know you are in the presence of a great Igorot.

Posted by Rexcrisanto Delson at 10:09 PM