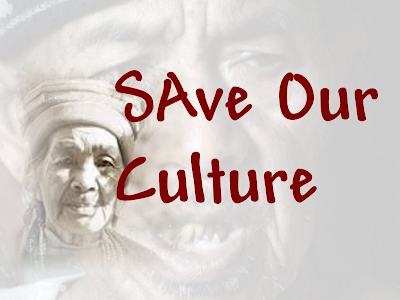 Well, the holidays are behind me and my mind swims in a pool of thoughts relating to the endangerment of my Igorot culture.  For me, the idea of it disappearing is a fascinating, albeit haunting thought.  What would it be like if the Igorot culture suddenly stopped existing?
I don’t refer to the type of disappearance that happened to civilizations like the Mayan, Aztec, Persians and so forth.   Instead, I am talking about the indigenous treasures that make up the Igorot culture: values, beliefs, behavior, language, arts, artistic expressions and way of living.  When I think of these things, I can see how easy it would be for them to disappear; first in the mind, then in the soul.
Except for very few credible written works documenting various aspects of our culture, all of what makes up our very essence today exists only because of the oral transmission of knowledge that has been passed down since the beginning.  Ancient writing systems that the Egyptians and American Indians had were luxuries that we Igorots forewent.
Guess who holds this knowledge today?  If you said the old folks, lolos, lolas and such; you’re absolutely correct.  Fortunately, there are still some alive who can transmit our indigenous knowledge, but some would argue that the accuracy of such knowledge lost much of its originality over the centuries.  Yet, the knowledge that has survived over the years is quickly fading away because the bearers of our golden indigenous knowledge are quickly leaving this earth and taking our treasures with them.
Now factor in the overwhelming modernization of the world we live in.  My cousin recently returned from my hometown of Guinzadan and told me how so many people vacated and moved away to Baguio, Manila and countries abroad.  The lure of a more modern life, educational advancement and better financial opportunities continue to draw people out of the mountains and into cultures different from their origins.
If one is not careful in their assimilation to that new culture, one can lose their identity as I almost did.  Take language for example.   According to the National Geographic, “Every 14 days a language dies.  By 2100, more than 7,000 languages spoken on Earth – many of them not yet recorded – may disappear, taking with them a wealth of knowledge about history, culture, the natural environment, and the human brain.”  They even go on to say, “. . . the Philippines host a multitude of diverse languages.  . . . The popular Tagalog and Filipino languages threaten small indigenous languages in the Philippines.”
What about those who remain in the Cordilleras and intend to stay there for the rest of their lives?  Are they safe from the same dangers that threaten us who live abroad in different lands?  I don’t think so.  The city life of Baguio and other Philippine cities has a way of also threatening the preservation of our indigenous knowledge.  In fact, a reoccurring sentiment usually arises when relatives in the Cordilleras comment on pictures that I post on Facebook of us American-Igorots dancing in public with our gangsas, wanes and tapis stating something to the extent of “we are more Igorot than many in the Cordilleras.” 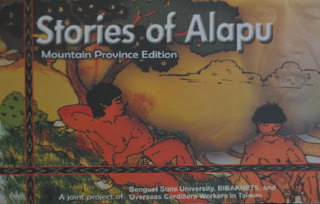 I applaud people like those individuals in the Benguet State University’s Department of Extension Education & Development Communication who are hard at work trying to save the very fabric that we Igorots are woven from: our indigenous knowledge.   Their first project, “Stories of Alapu”, is a book of indigenous stories that continues to be distributed to schools throughout the Cordilleras.  It is the first of other projects that are aimed at preserving our culture through proper documentation.  I was told they will be releasing a video tutorial of how to wear our native attire correctly.  I can’t wait to see it especially if it will aid in relieving the uncomfortable rubbing between my butt cheeks and the choking of my family jewels when I wear my wanes (g-string).
This topic is so close to my heart that I will be doing my best to convince Igorots here in America to support the preservation of our Indigenous Knowledge or “IK” as I prefer to call it.  This will start with the members of BIBBAK Illinois (see IK letter).  On a related note, my future book, “Igorotdō: The Warrior Within” aims to create an interest in our Igorot culture within non-Igorot markets as well as renew enough interest with Igorots to pick up books like “Stories of Alapu” or watch videos to learn more about their heritage.
I leave you with a couple thoughts.  First, next time you think about throwing more money to individuals in the Cordilleras to further their modern education, remember the thousands of Igorots who would like to learn about their endangered culture as well.  Lastly, many of you may have heard Microsoft’s marketing expression, “I'm a PC.”  Well, I just created a new one . . . “I'm a IK.”  It just so happens that I prefer PC’s over Macs so “I'm a PC,” and I prefer the preservation of our Indigenous Knowledge (IK) over modern progression, therefore, “I'm a IK.”  . . . . Are you?