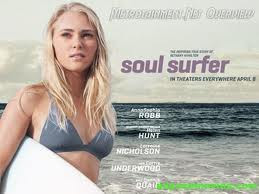 This morning, I had the opportunity to take my kids to watch a pre-screening of the soon to-be-released movie, “Soul Surfer,” starring Anna Sophia Robb, Dennis Quaid, Helen Hunt and Carrie Underwood. While waiting in line, I tweeted and posted on Facebook where I was and what movie I was waiting to see. The post ended with “stay tuned for a review.”

What I had in mind then was a simple posting saying something short, but after watching the movie, I had too much in my mind to fit in a tweet or post. I was so impressed with the movie that I decided to blog about it. So, here’s why I strongly recommend it:

It's a true story
Soul Surfer is the inspiring true story of teen surfer Bethany Hamilton. Bethany lost her left arm in a shark attack and courageously overcame all odds to become a champion again, through her sheer determination and unwavering faith.  Nothing beats a true story except for things inspired by a true story.


It’s something for the whole family
Today, we live in an age where it’s almost frowned upon to air shows and movies featuring happy families with both parents. Gone are the days of “Leave it to Beaver”, “Little House on the Prairie” and “Prince of Bellaire.” The family unit has changed so dramatically that it almost seems offensive to portray the American family as something it should be . . . a loving relationship between husband, wife and children.

I’m not one who believes in such a thing as a perfect family, but I strongly believe that families need to be there for each other at all times. I know the damage that results from broken up families; the destructive patterns that get passed down from generation to generation, and the dark things that no child should keep in their closets. I don’t need to tell anyone how saddening it could be for all involved, including society in general. Yet, these are the things that sell in Hollywood and continue to be fostered through television, movies and music.

Well, for those like me who have been waiting for something from mainstream USA to promote healthy family relationships; you will find this movie a breath of fresh air. The movie does a wonderful job portraying certain family dynamics that are so missing and needed in today’s world. Now if you’re the type who despises happy endings, positive and encouraging things; this movie may be hard to swallow.

Though politically incorrect for some, it takes a stand for good teachings
One thing that goes hand in hand with the frowning of traditional family structure is the mention of God and Jesus. Many deny the fact that there is an all out war going on between Hollywood and Christianity, but if you stop and observe all the shows being broadcasted, you will clearly see the absence of moral teachings. In fact, you will see aggressive attacks on Christian beliefs by companies you trust your kids to, like Disney. It baffles me how Disney allows and fosters shows like the recently announced pilot called, “Good Christian Bitches.” A show like that not only misrepresents the Christian community, but it is also very insulting for all women.

I love how “Soul Surfer” has a cast of well known actors and actresses such as Dennis Quaid, Helen Hunt, Carrie Underwood and AnnaSophia Robb starring in this movie that clearly has a Christian message. As I watched the movie, I thought, “This is like the Tim Tebow of movies.” Like Tim Tebow, who uses his professional football career as a platform to spread his Christian beliefs; this movie also shares its inspiring and moral messages to the mainstream audience. It takes a stand, and it does it in a way that is very accepting to those who would otherwise avoid it if it were called “Jesus Surfing” or similar.

The ethnic subtleties within
Being an Igorot whose ancestors were not Christian, but pagans who believed in the spirit world; I couldn’t help but notice the Hawaiian music used in certain parts of the movie. I’m sure for cinematic reasons; the music was needed, especially since the entire setting took place in Hawaii. However, maybe the producers carefully selected music like “Sunrise @ Maui Beach” to connect the audience to certain spiritual moments.

If so, it sure worked for me because there is something about the native music of tribal people, like the ancient Hawaiians, that speaks to the non-peripheral ears of the heart.
Although Igorots have resisted the Spanish colonization for more than three centuries and still maintain their culture, many have converted to Christianity. For the most part, Igorots who now live in America and abroad no longer practice our ancient beliefs or worship our ancient gods. This is probably true with the native Hawaiians; though I’m sure there are still those who do.

The movie has many good messages. The strongest among them happens to be Christian; yet music from the non-Christian culture of Hawaii only amplifies these messages. Subtle, but true.
As more and more Igorots become modernized and westernized, the need for spirituality tends to decrease over time. Maybe if more people realize the importance of having a spiritual side in their lives, they might be more open to the teachings and lessons of God. I think much can be learned from our pagan ancestors.

It is purpose-filled
Mahatma Ghandi once said, “Happiness is when what you think, what you say, and what you do are in harmony.” My parents and past mentors took it a step further though. They taught me to believe that unless these three harmonic elements are not applied towards other people, one will still be unhappy and unfulfilled deep within the recesses of his or her soul.

The movie throws out several biblical scriptures, but the one that really caught my attention was Jeremiah 29:11, which the movie quotes, “For I know the plans that I have for you, says the Lord. Plans to prosper you and not to harm you. Plans to give you hope and a future.”

This movie speaks volumes about having the kind of true purpose in life that will make people happy. It speaks of something that is rarely, if not ever, taught in the formal educational systems of our world. Instead, I hear only about the importance of having good grades and GPA’s so that we could find the happiness and prosperity that Hollywood and society sells. It’s no wonder that countless of people go through life unbalanced and unhappy.

Our purpose in life is perhaps the most asked question in the history of mankind. This movie does an excellent job addressing this question. I also attempt to address this in my upcoming book, “Igorotdō: The Warrior Within.” Hopefully, it also inspires people in their search of purpose.