Important Lessons from the Ainu of Japan


At times it can be a challenge for Igorots who still live in the Philippines to maintain their ethnic identity, but their challenges are nothing compared to those who immigrated to America and other western nations. This is mainly because the assimilation factor for small ethnic groups that exists in these countries is two-fold.  For example, a Filipino from the major metropolitan city of Manila is faced with the challenge of assimilating into the American culture, whereas an Igorot not only faces the same challenge, but also faces the challenges of assimilating into the general Filipino populace without losing their connection to their true ethnic identity.

I thought about this recently when I was in a church filled with over a thousand Filipinos attending the Filipino Christmas tradition called Simbang Gabi.  I wore a traditional Igorot vest over my dress shirt to express my ethnicity, but more importantly so that my children could see that I am proud of being an Igorot.  There were also a handful of other Igorots there, but they wore the traditional Filipino dresses and Barong Tagalog shirts.  Since it was a Filipino event that called for Filipino tradition, it made sense to me.  There was also a time when I wore my Barong Tagalog to Simbang Gabi, but the more I learn about my heritage; the more I realize how important it is for me and my children not to lose our connection to it.  This is why a simple act of switching from the Barong Tagalog to my native attire makes so much sense.

Imagine a long-time Chicagoan who moves to another country and is asked by its people, “Where are you from?”  Does he emphasize Chicago or America?  Does he talk about the unparalleled pizza, hot dogs, sports teams, ethnic diversity, culture and all that make Chicago wonderful, or does he talk in general about America?    I realize comparing this to ethnic cultures is like comparing apples to oranges, but I think the point can be made that smaller ethnic groups are faced with more challenges when it comes to maintaining their ethnic heritage.

So how then can small ethnic groups successfully assimilate in western nations and still keep their heritage alive for many more generations to come?  The answer is both simple and difficult.  Simple in that all we need to do is practice and teach about the importance of our heritage to our children, but difficult because human nature tends to want to be part of mainstream society – in my case: Filipinos and Americans.  This is why it is important for people of smaller ethnic groups to form close bonds with others who share and practice the same cultural beliefs and practices.

I recently learned about a small indigenous group in Japan known as the Ainu people.  As recent as 2008, the Japanese government officially recognized them as indigenous people.  Prior to that, they have been referred to as “former aboriginals,” according to the Aoteaora Ainumsor Exchange Program (AAEP).

The Ainu were forced to assimilate into the Japanese culture many years ago and as a result, many are no longer connected to their Ainu heritage because of deeply rooted discrimination that pervades the Japanese society, or the inability for people to discover meaning in being Ainu. Either way, there are still many people who have yet to assert their Ainu identity.  Surprisingly, a Hokkaido government survey points out that:

There are about 24,000 Ainu people, however in reality there are several times more Ainu people than that figure leads us to believe.  Out of 5,000 to 10,000 Ainu people living in the Tokyo metropolitan area alone, only around 100 of them are active as Ainu.


It’s sad that only 1 to 2% of the Ainu in Japan are active as Ainu.  Now just imagine how much less of a number that would be if they had to assimilate into two cultures like the Igorots in America.  Fortunately for the Ainu, there are many who are trying to revitalize their heritage. 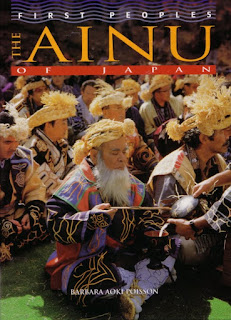 I was inspired to learn about a campaign that is trying to raise funds to send Ainu students to Aoteroa (New Zealand) to learn how its indigenous Maori people have been working to ensure the survival of their culture.  The students will learn how the Maori have advanced their rights as indigenous people of New Zealand since the 1970s.  More important, they can see how the Maori are significantly contributing to the development of New Zealand’s economic, political, cultural and social landscapes.  It is a worthy cause that will raise the consciousness of the Ainu heritage and will help inspire more Ainus to re-connect with their estranged heritage.

The Ainu teaches us two very important lessons.  First, it teaches us that unless a conscious effort is made to preserve our own ethnic heritages, the dreadful decline of one’s heritage is certain.  Fortunately for them, it’s not too late. Second, we can always benefit by reaching out to another culture to better ourselves. We here in Chicago are fortunate to have so many different ethnic cultures that it would be a shame if we didn't try to take the time to learn something from any of them.

This post is cross-published from Examiner.com. Read full article HERE.

You can help send Ainu students to New Zealand by contributing to their fundraiser campaign:

Posted by Rexcrisanto Delson at 12:44 AM