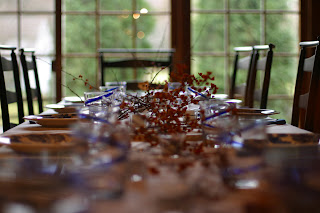 Every fourth Thursday of November, we Americans celebrate a holiday called Thanksgiving Day.  Since as far back as I could remember, the Thanksgiving Day story was about how the American Indians and Pilgrims once celebrated the bounty of their harvest together.  My memories of all the Thanksgiving day school plays, television shows and movies drove home the meaning for this day – a day to celebrate and give thanks.  However, like Christmas, its original religious meaning has been under attack and more and more people are calling it “Turkey Day.”  What a shame.
I have experienced forty Thanksgiving Days while living in America, and I don’t recall the details of most of them, but I do know they all involved food and family.  Though most are fuzzy or forgotten, there are three particular Thanksgiving Day occasions that still remains clear as day to me.
The first took place when I was about six or seven years old.  It must have been the first time my mother cooked turkey for us because I remember how big of a deal it was to eat a whole turkey for the first time.  After morning Mass, she spent many hours cooking while we kids cleaned the house for what I thought was a celebration with family friends at our house.
When it came time to eat dinner, it was just our immediate family.  We all sat down at the table with eyes wide open.  It was our first time to see such a large cooked bird on our table.  The drumsticks alone was the equivalent of one whole chicken.  Eventually, my mother had us bow our heads in prayer.  Less than a second after our prayer, our little eyes shot back up at the huge turkey.


My mother's eyes opened wide as she looked at my dad with bewilderment before looking at my sisters and I.  It was clear that she didn’t know how to cut it or serve it.  The anticipation and hunger in our eyes were too much for her to keep us waiting longer, so after taking a deep breath she loudly said, “Attaaaack!”
Armed with only our little bare hands (our normal way of eating then) we kids attacked the huge soy and garlic basted bird.  Chicken drumsticks have always been my favorite so I grabbed a drum stick and yanked it from the big ball of flesh.  The skin tasted so good, but the meat was not what I expected.  It was tougher than chicken and had several thin tendons that got in the way.  I was curious how the rest tasted so I impaled two of my fingers into the turkey’s side and ripped out a chunk of breast meat.  This too was disappointing because of its dryness, but fortunately a bowl of siwsiwan was right in front of me.  I drowned the dry meat in it and the rest was history.  Needless to say, turkeys have rarely found their way back on our kitchen table.  Dinardaran, pinikpikan, rotisserie chicken, steak, kambing, pancit, kilawen, pasta, and mostly anything else were and still are preferred over turkey.
Another Thanksgiving occasion that comes to the top of my head was when I spent it with my Filipino high school friend and his family while living with them for a year when my parents were in Illinois on business.  We drove to his cousin’s house for the day where I encountered my second Thanksgiving turkey.  This time it was placed in the center of the food table surrounded by an assortment of Filipino food for people to serve themselves and eat buffet style.
I was amazed when many people gathered around the table to watch his uncle carve the turkey.  He brought out an electric knife and proceeded to display his turkey carving technique to everyone watching.  As I watched, I thought about how silly it seemed to get all caught up on the technique when people could just grab a knife and cut off whatever piece they wanted.

Thoughts of that day my sisters and I “attacked” the turkey brought a big smile within me.  I quickly realized how much I took our family celebrations for granted when I noticed the lack of "thanksgiving" and close family interaction.  It was a fun party, but it just didn't have that meaningfulness that I was accustomed with.
The last Thanksgiving I shared with my family before my parents and sister died was in 1990.  With my sisters living out of state, Thanksgiving Days have almost always been spent with friends and my wife’s family, and almost always eating the meal in a buffet-like manner.
This brings me to the third Thanksgiving that I’ll always remember.  This took place in 2003 just after I was laid off from my job in Florida and moved back to Illinois.  My wife’s parents were so gracious to have us live with them until we found our own place.  When Thanksgiving came around that year, I was so happy to hear that all my sisters and their families were coming to spend Thanksgiving dinner together with me.
It was the first time we all got together since my parents and sister’s funeral.  At first, we weren’t sure where we would have dinner that night since I was technically homeless.  Fortunately, my in-laws were so kind to allow us to use their house that evening.
It turned out to be an unforgettable reunion.  Even though we barely managed to cram around the table, we were able to share an evening of thanks, love and laughter.  That feeling of sitting around a table together as a family again along with my own family was so surreal that I had to stop and appreciate the moment on several occasions that night.