Thanksgiving Day just passed and the Christmas and New Year holidays are fast approaching, which means more food in the oncoming weeks.  It is one thing to enjoy eating food, but it is definitely something else to enjoy cooking it. More than often for me; I enjoy cooking it more than I do eating it.
Since I was about ten years old, I have always enjoyed cooking.  As early as the age of ten, I woke up before any of my five sisters and parents.  I didn’t need an alarm clock because I must have had it in my mind to wake up early just so I could cook breakfast for everyone. 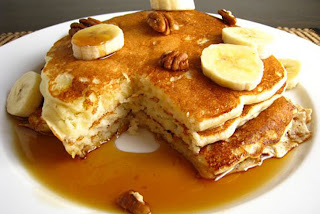 Immediately after waking up at around five thirty or six o’clock, I wasted no time brushing my teeth or changing the clothes I slept in.  Instead, I quickly wiped the dry crusty mukot from the corner of my eyes and silently swept through the hallway, down the stairs and to the kitchen.  Once in the kitchen, I placed the round stainless steel bowl on the table and gathered flour, eggs, milk, salt, baking powder, butter and the desired fruit of the day, which usually turned out to be bananas.
After mixing the ingredients together and achieving the desired smoothness and thickness of the batter, I dipped the ladle into the bowl making sure there was an even proportion of fruit and carefully poured it into the center of a hot frying pan.  Once the right number of bubbles appeared, I quickly flipped the pancake over with a goal of not splattering any of the batter beyond the perimeter of the pancake.  The smell usually woke everyone up by the time I got to my final few pancakes to cook.  When they came downstairs and gathered around the table, it always made me happy to see them enjoying my cooking.
Back then, I used to dream about having my own restaurant some day.  My mother would often say, “You should start your own restaurant when you get older.”  Then my sisters would reply, “Yeah.”  I would agree and say, “Yeah, and when I do, it’s gonna be on a boat so I could catch my own fish and cook it for people.”  Well, I never did go into the restaurant business for myself, but if anyone were to ask any of my five sisters today who the cook in our family is, they would always mention me.  In fact, I still do most of the cooking in my house now.
I always thought it to be normal for a guy to cook until sometime in high school when a group of guys made fun of an underclassman for always cooking.  They made it seem like men who liked cooking were sissies or feminine.  Needless to say, when around my peers, I kept my desire to cook to myself for most of my high school years.
After graduating from high school, I became re-acquainted with an old family friend whom I call “Uncle Sam.”  Uncle Sam Molitas is an Igorot who isn’t really my uncle, but since he was very close to my parents and called my dad “Manong,” I prefer to look at him like an uncle.  At the time, he was still enlisted in the Naval Reserve as a cook.
I noticed how he too did a lot, if not most, of the cooking in his family.  Every time I ate his food, I enjoyed it so much that I wondered what his recipe was.  One day, I was fortunate to have him teach me how to make a fish dish with patis, onions, tomatoes and lemon.   Knowing he was in the military and loved to cook shattered any reservation I developed about expressing my love for cooking.
Since then, I continued cooking and experimenting with all sorts of recipes.  Rarely did I refer to a cook book.  Most of what I cooked started with a desired taste in my head.  Sometimes it wasn’t about taste.  Sometimes it was about a special occasion, such as when my son was born.  He was such a sweet baby that I concocted a chicken recipe using mangoes & mandarin organges and named it after him by calling it “Chicken Joshua.”
﻿﻿
﻿
﻿ ﻿﻿

Later in my thirties, an opportunity came my way to work part-time in a Japanese restaurant as an assistant chef.  I became an apprentice of a Japanese sushi chef whom I call “Ide-san.”  This guy is the real deal; not like what so many so-called Japanese restaurants have today.  Ide-san learned his skills the old fashion way in Japan where he spent the first five years just cleaning fish.  Most sushi chefs I encounter these days don't come close to his knowledge, skill and passion for sushi.  Fortunately for me, even though I was his student or “deshe,” he taught me a lot from the very beginning.
﻿﻿
﻿﻿

I have always wondered where I got my knack for cooking.  I used to think it was from my mother, who constantly cooked for us and kept me away from the restaurant dining experience for most of our lives.  Now I wonder if there is a little bit of that “Igorot within” that is responsible for many happy tastes buds as well as hand burns.  I don’t consider myself a believer of one’s actions being the result of one’s “nature,” because I believe that we are nurtured or taught to become who we are and that “who” we are is a matter of choice.  However, I can’t help but play with the thought that I am picking up from generations and generations of Igorot men before me.
For an unknown number of years or centuries, the Igorot man was never a stranger to the task of cooking.  In fact, Albert Ernest Jenks once mentioned the role of the Bontoc Igorot man in preparing meals in his letter of transmittal to the U.S. Department of the Interior in 1904 by saying,

“The man of the family arises about 3.30 or 4 o'clock in the morning. He builds the fires and prepares to cook the family breakfast and the food for the pigs. A labor generally performed each morning is the paring of camotes. In about half an hour after the man arises the camotes and rice are put over to cook. The daughters come home from the olag, and the boys from their sleeping quarters shortly before breakfast. Breakfast, called “mang-an′,” meaning simply “to eat,” is taken by all members of the family together, usually between 5 and 6 o'clock. For this meal all the family, sitting on their haunches, gather around three or four wooden dishes filled with steaming hot food setting on the earth.”
I am sure not all Igorot men like or know how to cook, but I myself have not met an Igorot man who couldn’t cook a tasty meal.  I was reminded of this last Christmas when visiting my aunt in Atlanta.  Her son, who is of a younger generation, surprised me by cooking a wonderful Igorot dinner for our family and his one night.  I also suspect he is the kosinero in his family as well.  Maybe there is some truth in having some of that “Igorot within” us after all.  Hmmm.