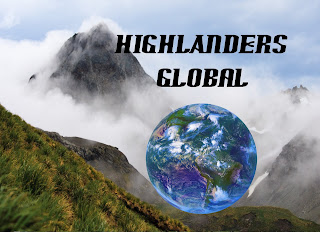 I recently started a Facebook group called “Highlanders Global.” I have been wanting to create such a group since I met a few Scottish highlanders during a July 4th parade in nearby Downers Grove, Illinois several years ago. The idea remained in my head like a dormant seed until last March when my family and I met a very nice Goral highlander family from Poland. Shortly after our encounter, the seed germinated and I began doing some research into their culture, which led me to research more about the Scottish highlanders.


The encounter and research into the Goral culture compelled me to write a blog called “Gorals and Igorots.” In June I came across several Scottish highlander authors through Twitter. One of them posted an article about the wearing of their kilts, which led me to more research that resulted in another blog called “The Fabric of Highlanders: Scottish and Igorot.” By then, the little seed that sprouted grew enough to finally find the time to create that Facebook group I wanted.

Several days have passed since I created the group and I still have to find the time to add some real content such as discussions, related posts and such. I had plans to work on it this past weekend, but a camping excursion with many of our friends kept my computer virtually closed all weekend. After a weekend of camping, biking, hiking and boating; I was ready to put things off another week until this morning.

Sore, tired and sleep deprived; I stopped at a nearby oasis (rest area/food court situated directly above the highway) during work to buy a cup of espresso from the Starbucks within. Ahead of me in line were two men and a young girl. They were of medium-dark complexion and were speaking to each other in another language that sounded familiar. When I saw that the girl was wearing a shirt that had the word “Ethiopia” on it, I suddenly remembered where I heard their language. It was at our favorite Ethiopian restaurant in Chicago called “Ethiopian Diamond Restaurant.”

When it came time for them to pay, I saw that they were short 35 cents. One of them looked over his shoulder at a distant table where the rest of his party sat eating. He bent down and said something to the girl as he pointed to their table. From the looks of it, it seemed like he was telling her to get more money and bring it back to him. Without hesitation, I reached into my pocket, pulled out 35 cents and handed it to the cashier.

The other Ethiopian man saw what I was doing, shook his head and said in his broken English, “Oh no, no sir, we have money.” I smiled and replied, “It’s no big deal. Really. Please allow me.” Realizing I was intent on helping, he smiled and thanked me.

They returned to their table while I waited for my espresso. While waiting, I watched them as three more of their friends just joined them. The adults stood up and greeted the newcomers by kissing them on both cheeks – a sight I often saw when eating at the Ethiopian Diamond Restaurant. With espresso in hand, I began casually walking in their direction while heading toward the exit.  As I approached their table, the man I talked with stood up and looked at me. I smiled as he said thank you again. I veered toward their table and began talking with them.

“Are you Ethiopian?” I asked.

They all smiled and replied almost in unison, “Oh yes.”

I introduced myself and told them how I love Ethiopian food. They looked happily surprised.

“You know about our food?” asked one of the ladies.

“Of course,” I replied. “My favorite is Yebeg Watt (lamb in spicy sauce) with Injera (flat bread).”
The whole table smiled with happiness.

The man who remained standing then introduced himself as Awate (I think that’s how it’s spelt) and proceeded to introduce his family, brother, sister-in-law and mother. They were from Minnesota and were passing through Chicago on their way to visit family in New Jersey. Awate then told me that his mother arrived to the U.S. on a tourist visa last week. When I asked her how she likes our country so far, she just smiled and looked at Awate for a translation before replying.

“She is very happy to be with her children, but she is already missing home,” Awate relayed to me.

“She misses the mountains where we’re from.”

“Mountains?” I asked as my ears perked up.

“Yes,” he replied with pride. “We have some of the tallest and most beautiful mountains in Africa.”
Thrilled to hear this, I happily and surprisingly replied, “Really!? No kidding. I am also from some of the highest mountains in my country.”

This triggered a very fascinating 20 minute conversation with them about the mountainous regions of Ethiopia. I learned they are called Eritean, but are also considered highlanders and those who lived below are also referred to as lowlanders. It fascinated me to learn how they are the only people of Africa who weren’t colonized by foreigners. When I told them how Igorots weren’t colonized by Spain and other countries, they were also truly amazed. Like Igorots, they have their own language and culture that distinguishes them from their fellow Ethiopians and Africans. Most of the Ethiopian highlanders are Christian while most of the lowlanders are Muslim. I would love to have stayed longer conversing with them, but I was running late for a work related appointment.


Today’s pleasant encounter reinforced earlier thoughts about the importance of learning about other mountainous cultures and finding common denominators or similarities between them. I believe that by doing so, more people will come to a level of respect and brotherhood that can lead to world unity.

If you know of any highlanders from any corner of the globe, please share this and the Facebook “Highlanders Global” group link with them.