Scornful Treatment of “Our Pearl Harbor” 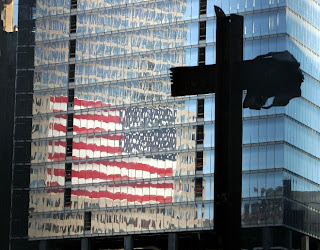 The tenth anniversary of the devastating events of 9/11 (our Pearl Harbor) is fast upon us.  Hopefully, many people will remember, memorialize and pray for all those who lost their lives that horrible day.  Notice, I said "hopefully."
Last July, I came across a headline about a lawsuit filed by an organization called “The American Atheists.”  The organization was demanding the removal of the cross enshrined at the 9/11 memorial and museum in New York City.  Fortunately, Congressman J. Randy Forbes slammed the lawsuit and defended the cross while calling the organization’s efforts “sad and misguided.”
Earlier this week I learned of the terrible decision by the Mayor of New York City, Michael Bloomberg, to exclude any prayers from clergy at ground zero in this Sunday’s official memorial ceremony.  In addition, Mayor Bloomberg is NOT allowing the first responders (firefighters, police, paramedics, etc.) of that tragic day attend the ceremony.  What a shame!  What can be more scornful than that?
How about taking salt and rubbing it into the gaping wounds just mentioned, which many seem to be doing.  The salt I am talking about is actually the notion that we, the nation, needs to “get over” 9/11 and move on.  Hard to believe, but I’ve heard this mentioned on several occasions in the last few days.  The first thought that came across my mind was whether these people ever lost a loved one.  If so, they should know better than to think we should get over it.
Getting Over?
Let me shift gears here and attempt to address a topic that I think women are better at articulating: the death of loved ones.  Most men, including me, tend to allow our machismo to hide what I believe is a basic fundamental truth about how we get over the death of a loved one, and that is – we DON’T.  Oh sure, anyone can play the game and “appear” so, but the reality within the crevasses of our heart says otherwise.
Sixteen years has passed since the car that my parents and baby sister were in flipped into the air over the highway median and landed on a fast approaching car.  I lost all of them that day and the surviving five year old boy in the other car lost his parents as well.  Mourning is expected immediately after the incident and even months thereafter, but for some reason, people develop a notion that one “gets over” it.  To the common eye, I certainly appear so because I am able to talk about them without signs of pain (usually).  Some of the large pictures of them that used to take up wall space at my last residence remain stored in the basement of the new house.  By appearance, I guess it's easy for one to come to the conclusion that I'm over it.
The truth is, I never got over it, and I will never get over it.  I love my dad.  I love my mom.  I love my sister.  I still periodically dream about them as if they were still alive, and when I wake up, I try going back to sleep so that I can be "there" with them longer.  Every time I meet new parents in their early thirties, I think about my sister and the kids and husband she would have had she survived the crash.  In some shape or form, I think about them every day. Their deaths have created three vacant holes in my heart/soul that only they can ever fill.  Fortunately, their love gives me the faith to believe that someday those holes will be filled if I make the right decisions in life and join them in their heavenly splendor, but until then, the holes remain within.
Moving On
Last month, my friend, Marlon, invited my family to his house to join them in a memorial dinner in memory of his father and grandfather.  I was pleasantly surprised to get the invitation because it was something more of his planning than that of his wonderful wife.  Like most men, Igorot men are no different when it comes to keeping our macho wits about us.  When we arrived, several others of our Igorot friends were already there.  I walked into the dining room and smiled at all the delicious food set on the table.  Immediately next to the table were two large pictures of his father and grandfather that stared at everyone in  the room.  It was an appropriate setting.
We all gathered around the table and listened to his heartfelt memorial prayer.  Upon the conclusion of his prayer, we “moved on” and began eating in a more festive spirit.  Later that evening, several of us were gathered in the dining room talking and drinking.  It so happened that we all lost a loved one somewhat recently.
I poured a glass of brandy for everyone and we all did a toast to those we lost.  Afterwards, we took turns sharing our funniest memory of them.  It was great to cut through all the small-talk smoke and mirrors and just talk about someone we cared so much about, even though it was humorous.  It’s these moments of memorializing that helps us move on with our lives.  More importantly, they help remind us of our tasks as parents and the need to leave behind that which is most important – Love.
Our Pearl Harbor

On December 7, 1941, Pearl Harbor was attacked by the Japanese Imperial Navy.    Hundreds were injured and nearly three thousand Americans were killed.  Those who survived the attack and are still living today will tell you that they never got over it.  Imagine how they would feel if prayer were not allowed at the memorial services then or if the military service men and women survivors were not allowed to attend their tenth anniversary in 1951.  Has main stream society’s political correctness gone too far?  Yes it has.
However, you can make a difference by not allowing this weekend to go by without taking a moment to pray in your own way for those who lost their lives, their surviving loved one and the future of our country.  Like Marlon's dinner; the combination of prayer, fellowship and memorials are what will keep this country from deteriorating.