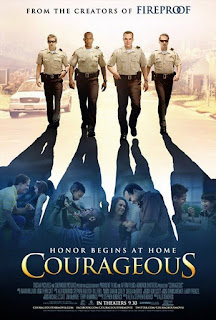 I was prepared to blog about the significant advantage of growing up in America with role models, coaches and mentors as compared to other countries that lack these people, that is, until I went to see today’s matinee showing of the movie” Courageous.” The movie was so inspirational that I’ve decided to shelve the topic of mentors and coaches for another day and talk to you about something much more important – Courageous fathers.

The Need for Fathers

Since my growing up years in America during the 70’s and 80’s; the image, role and personification of fathers have taken a drastic change for the worst. Our nation has been severely kicked in the kidney by the staggering number of fatherless children. As a result, we as a nation, bleed from within. The incapacitating blood makes its way out in various forms of pain, anger and sadness.

The movie points out several interesting statistics that supports the need for fathers. Just Google “father statistics” and you’ll find plenty of evidence. For example, Dadsworld.com sums up the importance of fathers by stating:


It goes on to list shocking statistics such as:

The last time I checked, the last virgin birth occurred 2011 years ago. That means every child since then has a biological father. So then, where are all of you?

Being a Father Is NOT Enough

The University of Texas at Austin once surveyed 701 fathers and discovered that the top 4 major obstacles for fathers to overcome are: 1) Work demands, 2) The media, 3) Pop Culture and 4) Finances. I couldn’t agree more, only I would add “ego” as a 5th, but since all four essentially feed our ego, I’ll leave it at the four.

I believe every father is hit by all of these at one time or another, but as the saying goes, “It’s not what happens to us, but how we react to those things that determine the outcome.” A father’s lack of involvement in their child’s life can no longer be blamed on these outside forces. We can no longer stand on the sidelines and passively watch the lives of our children go by.

Today is Saturday, and that means college football for many men. Tomorrow will be NFL day. Take a look at all those men who paint their faces and do crazy things to display their passion for the game. I love watching American football as much as any other man. In fact, I can easily be one of those guys with a painted blue face doing the Gator chomp at a Florida Gator game. If we men can be so passionate about something like football, why can’t we be as passionate about our families?

The movie forced me to look deeper at my role as a father, and quite frankly, I was uncomfortable at first, but quickly found myself reflecting on all the four aspects mentioned above. My weaknesses surfaced. I’ve always known my weaknesses deep down, but I haven’t had the courage to confront them with the level of intensity and faith that I know it takes. What can I say; I’m just as human as anyone else.

In my upcoming novel, Igorotdo: The Warrior Within, courage is one of the lessons that the main character learns from his Igorot ancestors. This same courage that enabled his people to resist more than three hundred years of colonization by Spain, overcome the superior Japanese enemy of WWII and overcome discrimination from Americans and fellow Filipinos is a key component of being a warrior both then and now.

I’ll leave you with the lyrics of Casting Crown’s song “Courageous” . . .

Posted by Rexcrisanto Delson at 7:50 PM