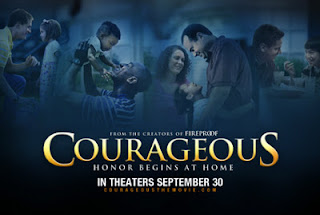 There is a first time for everything.  When I went to the theatre twenty nine days ago to watch Courageous, I left there knowing I would return to watch it again or at the very least, rent the DVD; something not out of the ordinary.  Little did I know that I would actually return to watch it four times at the theatre!  I’ve never done that before.


Because of scheduling conflicts, I saw it by myself on the opening weekend and then blogged about it that evening.  The following weekend was with my wife.  The third was with my two daughters, and the fourth was with my son.   Each time was different; same movie, but different meanings, lessons and perspectives.
After processing it for the last four weeks, I’ve developed a deep sense of appreciation for my parent’s decision of leaving the Cordillera Mountains in the Philippines to raise our family here in America.  Like most people, my parents saw America as the land of opportunities.  They not only wanted to escape the oppressive Marcos dictatorship that posed as a real threat to my family at the time, but they wanted more than what a politically and economically crippled country had to offer my five sisters and me.
I grew up watching them work so hard to support our family.  My mother came to this country as a registered nurse and my father was a civil engineer.  After several years, they left their careers to pursue the American dream via the free enterprise system.  As they went from successful business to successful business, I began developing the false notion that America’s opportunities were limited to material and tangible things.  Money, houses, cars, degrees, titles, prestige, accolades and so forth were the most touted things at the time (still is).  Unfortunately, my youthful ignorance allowed these things to define the American dream for me.  I was too young to realize it then, but I now believe that the greatest opportunity our country has to offer is the freedoms afforded to parents to raise their children to the best of their abilities and for us as individuals to become the person we are suppose to become in God’s eyes.
As first generation immigrants, my parents took advantage of these freedoms by sacrificing to put five six children through Catholic schools and working the free enterprise system hard enough to keep us from the dangers that are often associated with low income and poverty.  Yet, as much as they tried their best, which I believe they did; I wish they spent more time with me and became more involved in my life on an intimate level.  I see this as a common problem with many new immigrants.
In my almost forty years in America, I’ve noticed that many new immigrants I was and am exposed to (particularly Asians and Hispanics) who decide to pursue the American dream by working very hard, often fall short of spending the amount of time needed to mold responsible and morally-driven children.  Those with lesser education and skills work hard just to survive, while those of higher education and skills work hard to provide a so-called better lifestyle for their families.  Either way, the children are often the victims of what my Marine Corps drill instructor called “good intention, wrong execution.”  In war, this often leads to the deaths of fellow Marines.  In life, this often leads to the death of character and moral values in our children.  The facts mentioned and portrayed in Courageous only supports what I’ve seen all too often: teenage pregnancies, teen drug addiction, irresponsibility, lawlessness, gangs, violence, suicides and so many other destructive patterns.  This is why Courageous “hit me between the eyes” (as Courageous’ Nathan Hayes was quoted when he was talking about the resolution).

The movie makes it clear that everything starts within the home.  Although it focuses on the role of men, it’s pretty clear that the entire family unit is the foundation for everything. So many people make the mistake of relying on schools and outside programs to mold their children.  This needs to change especially since our world has progressively become dangerous for kids.  The internet alone is enough to raise strong concerns about the exposure to pornography and destructive patterns to children as early as their first grade and second grade years.  As the main character in Courageous says in his speech,

“You can’t fall asleep at the wheel, only to wake up one day and realize that your job or your hobbies have no eternal value, but the souls of your children do.”

I know there is no such thing as a perfect family, and that is why I appreciate my experience in America even more.  Whenever the family falls short, there are others outside the family who can help forge our character for the better.  When you combine a loving family with good people such as mentors, coaches, teachers and leaders; synergy is formed and wonderful things happen as a result. 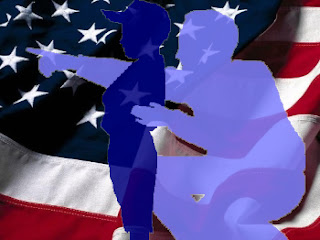 After watching courageous for the fourth time, I thought about the people in my own life that made a difference, and an immediate sense of gratitude came over me.  Without people like Frank Dachille (basketball coach), Bill Neu (mentor), Ikka Nakashima (mentor), Sgt Whitten (Marine Corps drill instructor), Hoichi Kurisu (mentor), Art Williams (business leader), Sister Imelda (1st grade teacher), Sister Carol (high school teacher); I honestly think I would be worse off today.  Could people like these have entered my life had we stayed in the Philippine Cordilleras?  I don’t know, but if I were to speculate on this question, I think I would say “highly doubtful.”

I’ve always believed that if one sorts through all the bad garbage (and there is a lot) in America, one will find gems that make this country so great.  One of these gems is the making of inspirational movies like Courageous.  That’s right, even though Hollywood still inundates society with a plethora of degrading and harmful movies and shows; America still offers the opportunity for those who want to make a positive difference to create good and inspiring movies like Courageous, Soul Surfer, Blind Side, Fireproof, A Better Life and so forth.

When families and even mentors fall short, inspirational movies like Courageous helps fill in the gaps.  Thanks to Courageous, I have been blessed with the inspiration and opportunity to take my twelve and fifteen year old daughters to a restaurant where we made a pact similar to the father-daughter pact that Nathan had with his daughter in Courageous.  It wasn’t a fancy restaurant like in the movie, but it was more of their liking because of its Asian appeal – a Korean restaurant (one of their favorites).  Also, no rings were exchanged as was in the movie because one daughter thought it was a “cheesy” gesture.  Nonetheless, it was an unforgettable evening that would not have happened had I not seen the movie.  The movie also opened my children’s eyes to my desire to become the best father possible, which is truly priceless.   Lastly, it re-instills the importance of keeping an inspirational focus in my writing.

If you haven’t seen the movie yet, go see it or buy the DVD when it is available.  Until then, here is the sneak preview of the written resolution that the movie is centered on:

"I do solemnly resolve before God to take full responsibility for myself, my wife, and my children.  I WILL love them, protect them, serve them and teach them the Word of Goad as the spiritual leader of my home.  I WILL be faithful to my wife, to love and hoor her, and be willing to lay down my life for her as Jesus Christ did for me.  I WILL bless my children and teach them to love God with all of their hearts, all of their minds, and all of their strength.  I WILL train them to honor authority and live responsibly.  I WILL confront evil, pursue justice, and love mercy.  I WILL pray for others and treat them with kindness, respect, and compassion.  I WILL work diligently to provide for the needs of my family.  I WILL forgive those who have wronged me and reconcile with those I have wronged.  I WILL learn from my mistakes, repent of my sins, and walk with integrity as a man answerable to God.  I WILL seek to honor God, be faithful to His church, obey His  Word, and do His Will.  I WILL courageously work with the strength God provides to fulfill this resolution for the rest of my life and for His glory.  As for me and my house, we will serve the Lord."